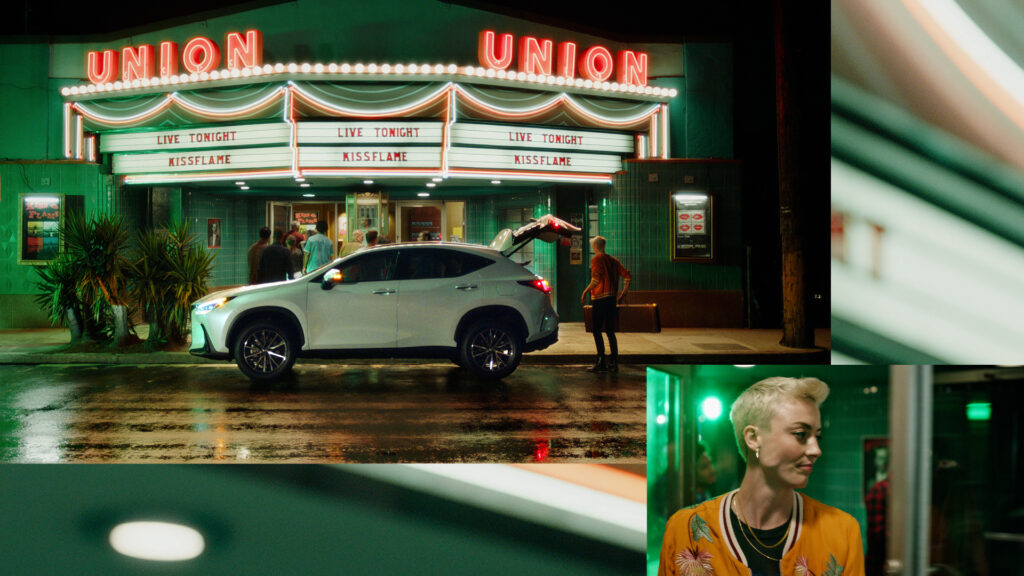 To kick off the year, Lexus is supporting the launch of its new 2022 NX crossover vehicle with a digital and streaming-focused marketing campaign centered around redefining the concept of success. Featuring seven unique spots each with a different target audience, the “Hustle for What Matters” initiative highlights the new Lexus Interface multimedia system and 14-inch touchscreen, revamped design touches and electrification capabilities.

Coupled with the creative is an integrated media campaign brought to life through several gaming and tech partnerships. On Twitch, Lexus is taking aspiring creators on a ride in the NX to hear pitches about unique streaming ideas and is allowing fans to decide which idea will become a reality. For 100 Thieves, the brand is developing a car wrap featuring a custom graphic representation of the team’s League of Legends Championship victory. Consumers can also experience the NX’s redesign through a Google Cloud-streamed AR experience.

We caught up with Vinay Shahani, Vice President of Lexus Marketing, to chat about the new campaign, its diverse target audience and the brand’s push to make Lexus a tech-forward automotive brand that’s appealing to younger luxury consumers.

Chief Marketer: Talk about the strategic marketing goals of the NX crossover campaign.

Vinay Shahani, Vice President, Lexus Marketing: The NX is emblematic of the future of the brand in terms of some of the key strategic elements that Lexus wants to focus on as far as product and services for the future. [It highlights the] intuitive technology, with the new Lexus interface infotainment system, and its cool design, by virtue of the strong character lines on the vehicle. One of the other things we’ve talked about frequently in recent months is the notion of the Lexus Driving Signature, which is our unique approach to driving dynamics giving the driver confidence.

And then part and parcel to that is the electrification and the new powertrains we have to offer. As an example, for the first time ever, we have a plug-in hybrid in the Lexus lineup. We’ll also have a hybrid vehicle. We’ll have a turbocharged gas version. The bottom line is, we know that there’s a lot of luxury car buyers out there. They have a lot of choices. We see that the Lexus customer base historically has been a little bit older. So, strategically, we know we need to get a little bit younger. And we think that the NX is the perfect platform for us to go out there and confidently say who we are, what we stand for, and try to court younger buyers and younger luxury customers to consider us.

Chief Marketer: In what specific ways does the NX represent the future of the Lexus brand?

VS: I’ll use infotainment as an example. Infotainment is really high on the list for younger buyers, and if I’m being honest, Lexus has not done so well in recent years with the infotainment systems that we’ve had in our vehicles. The reason why we’re so confident in the all-new Lexus interface: We have a group of engineers here in the U.S., under the Toyota connected technology department, that basically went to Japan and said, look, we know what consumers here in the United States want, especially younger luxury buyers. So, let us take a crack at designing the system in terms of the usability, the interface itself, the touch screen, the voice interaction, and what functions that we want to have that are easily accessed through simple voice commands.

The connected technologies team came up with a phenomenal new system. When you put new users in front of it, they tell you that it’s very intuitive. [When] you compare it against other systems that are in the marketplace, we’re feeling really good about what this team has developed. This is something different for Lexus… and in the executions within the campaign, we try to bring that to life, whether it’s showing a young driver figuring out how to navigate from one place to the other, or the remote park, another cool technological feature where you can actually get out of the vehicle and use your smartphone interface to park the vehicle in a tight spot. These are examples of a tech-forward approach that is new for Lexus.

Chief Marketer: Do you have specific KPIs for this campaign?

VS: I’ll start with the creative approach. We call it our twist on the “hustle culture.” One of the spots is called “Hustle,” and it depicts a new take on traditional rules for getting ahead. We’re telling these stories to try to convince people who we know are ambitious and driven. They’re not striving for success just for success’s sake. We want to show them that Lexus has a new compact luxury SUV that caters to their unique individual needs and their emotional desires. And knowing a little bit about who these people are and where they consume media, we’re taking a digital media-forward approach and leaning into things like streaming to try to connect with this busy audience where they’re most likely to engage.

If you look at the campaign and watch some of these executions, the tone of the ads is very different than what you’ve seen from Lexus in the past and the reflection of this diverse market that we serve. We have a spot which is dedicated to Black-targeted media. We have one which is focused on the Hispanic audience. We have one focused on Asian Indian and East Asian.

Chief Marketer: The last time we spoke, we discussed your first Twitch collaboration. I’m wondering if that informed the current campaign. Obviously, this one involves an actual vehicle rather than a concept car, but did learnings from that make their way into this one?

VS: With the first Twitch activation…[about] crowdsourcing the ultimate gamers’ IS, we learned a few things. It gave us the confidence to say, okay, what more can we do with this platform? And working even closer with Twitch and its parent company, Amazon, was a lesson learned and a build on what we’ve done in the past. There’s going to be more where that came from. It’s been pretty exciting for the team to delve in and try new things. We’ll learn a lot from it, and that’s something that’s foundational to Lexus, this notion of “Kaizen:” never being satisfied and trying to say, okay, how can we do better than the last time?

Chief Marketer: You’re collaborating with Roku to tap into its first-party data. What’s new about this particular partnership?

VS: It’s about leveraging the data that we get from a partner like Roku and knowing where to find some of these consumers that we feel would be center of the bullseye from a targeting perspective. The cool thing about Roku this year is that we’ll have these ad pods, which allow the users to engage with the NX content in whatever show they’re streaming. It’ll feature a QR code. The cool thing about that is actually being able to look and see who is scanning the QR code, who is diving in and trying to learn more. That helps us refine where we go in terms of targeting for the future. That feedback loop is something new and unique.

Chief Marketer: You talked a bit about standing out from competitors. Other brands are also tapping into gaming audiences on Twitch, so what’s your strategy to set yourself apart?

VS: Certain things that have been associated with the brand we don’t want to lose track of. For example, being known as a brand that stands behind the product in terms of quality, reliability and durability. We have some ground to gain in terms of expressing the focus that we put on the infotainment and Lexus interface, and being able to show that, through partnerships like what we’re doing with 100 Thieves. The partnership with Twitch is another way to do it.

The integration on Fire TV is another way to tell a story about the NX where we invite guests to learn a little bit more about Lexus NX through an Alexa mini-skill. Some of these are going to work really well and some of them aren’t. We’ll have to look at the data. That’s part of the fun of this approach: We know that there’s going to be some winners and losers in terms of having partners that are going help us. Ultimately, we’ll look at the data and decide, are we going do it again—and how are we going to “Kaizen” and improve it the next time around?

Chief Marketer: There is a broad, diverse range of audiences that you’re targeting here. Is this going to continue for Lexus moving forward with other campaigns, or is it specific to this one?

VS: This is probably one of the broadest ones we’ll ever have. The reason for that is that the appeal of a compact luxury crossover is pretty widespread across many different demographics. The common denominator across all of these spots is the psychographic, which is this notion of “hustle culture” that we talked about earlier. When you combine that with what this product represents, it’s got pretty broad reach. Whereas when you go to a model like the new LX, which is a full-size luxury SUV, with a price point that’s approaching six figures, I don’t see us taking a similar approach in marketing that vehicle. You’ve got be pretty tailored and focused on who the target is and finding that customer.