While countless brands buy their way onto the sets of Hollywood films via high-priced, product-placement deals, STANLEY food and beverage containers has launched its first brand-focused, TV-led ad campaign that highlight the brand’s supporting role in the background of many of Tinseltown’s big- and small-screen classics.

The integrated-marketing campaign, dubbed “STANLEY Sightings” from ad agency Hanson Dodge, challenges consumers to identify 40 (and counting) films and shows where STANLEY products have organically appeared over the past four-plus decades.

In the campaign’s TV spot, “Channel Changer,” the ad flips through six fast-paced vignettes that represent iconic films and TV shows in which STANLEY appeared. It concludes with the tagline: STANLEY. Part of the scene since 1913; and a challenge to name them all.

Additionally, 18 social-media videos up the ante with more STANLEY bottle sightings. To help consumers prep for the challenge, all 40 films and shows that currently contain STANLEY appearances are groups on an IMDb watchlist.

“We’ve received thousands of amazing stories about STANLEY’s part in people’s lives over the last century,” said Eric Shear, global vp of PMI’s STANLEY brand. “So it makes sense we’re a part of the stories the professionals make. It’s a privilege for us to play even a small role in so many films and television shows.” 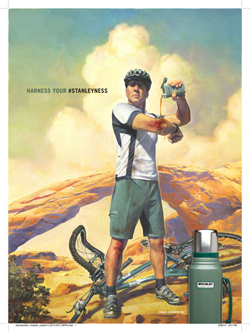 “Sightings” also includes movie-poster-sized out-of-home, as well as digital advertising, launched with a unique sponsorship of the Telluride Film Festival.

Sightings follow a June integrated campaign with Outside Magazine, #Stanleyness, that included a robust media. The campaign aimed to build a strong community on Facebook by celebrating the qualities STANLEY—a brand of PMI—loyalists have come to represent: timelessness, durability, confidence and humility, with a touch of badass ruggedness, the company said.