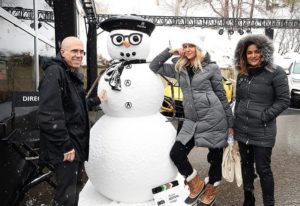 The annual Sundance Film Festival, which takes place each January in Park City, UT, is a wrap. As the largest independent film festival in the U.S., the 12-day affair is an optimal place for marketers to engage creatively-minded film and television fans, influencers and celebrities, and bigwigs within the film industry. This year, brands ascended the mountains to bring lounges with hot beverages, art installations, winter-themed photo ops and games to festival attendees, according to a roundup in Event Marketer.

Take Acura, which in its 10th year as presenting sponsor occupied a significant footprint with its Acura Festival Village. Live performances from bands and djs, a photobooth, a supercar installation, hot beverages and cocktail classes were on hand. Chase’s Main Street experience also welcomed in festivalgoers from the cold with a lounge experience that included cooking demos, free food and drink, arcade and table top games and perks for customers. Rideshare partner Lyft also set up a lounge with ski lodge-inspired décor and photo moments.

Gamification was another prevalent theme. Adobe created a Bingo-themed interview series to spice up the typical Q&A format and HBO promoted its forthcoming documentary series about the McDonald’s Monopoly scandal, called “McMillions,” with an interactive journey and prize wall.

For more details and photos of the activations at Sundance this year, check out Event Marketer’s deep dive.