Do you remember the first time you saw a hashtag on live television? When it happened, you probably didn’t know what it meant until your 14-year-old niece pulled up her Twitter feed. That’s when you saw the running commentary about the program you were watching.

Consider that your introduction to the phenomenon of integrated second-screen marketing.

With the market penetration of smartphones at nearly 72% in the U.S., the next logical step is to integrate digital marketing strategies with consumer activity. Millennials have grown up using mobile devices while they watch TV, and Gen Xers and Baby Boomers are following suit.

In an attempt to engage these multitasking viewers, experienced marketers are experimenting with new ways to help people discover, consume, and share second-screen content.

Secrets to Integrating the Second Screen

The power of the second screen and the quality of the customer experience depends on how seamlessly you integrate the second screen with other marketing strategies. Second-screen content should be easy for users to access from any smart device and updated in real time to alert users to any changes in programming.

It’s also important for second-screen content to be shareable. A study by the Time Warner Research Council found that people were 1.3 times more engaged in live programming if they interacted on social media at the same time.

Make it easy for viewers to talk to each other about the experience by providing a branded hashtag. Then engage them with exclusive content they can’t get from TV. Rewards, interviews with celebrities, additional footage, a live Q&A, and fun polls and quizzes are all great ways to engage users.

How to Measure the Success of Your Second-Screen Initiative

Adding a second-screen experience to your integrated marketing efforts requires in-depth planning, smart resource allocation, and careful monitoring to ensure you’re meeting both your company’s objectives and your audience’s needs.

To gauge the success of your second-screen marketing, consider tracking these metrics:

The 2012 Coca-Cola Polar Bowl is a great example of the power of active users. Coca-Cola created commercials featuring its famous animated polar bears and added a second-screen campaign that more than doubled its 300,000 concurrent live-stream viewers. The two bears reacted to the game, halftime show, and commercials in real time and went viral on Facebook and Twitter. 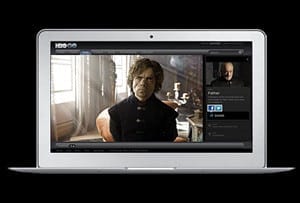 For example, the popular TV series “Game of Thrones” saw a 20% increase in viewer engagement after implementing an enhanced digital experience through the HBO GO app. The app offered extended scenes, interviews with actors, and closer looks at costumes and scenery. This all contributed toward making the fourth season of the show the most successful of any HBO series, even topping “The Sopranos” at its peak.

AT&T experienced positive results when it sponsored the “Team Coco” experience for fans as they watched “Conan.” Fans who used the app rated AT&T 33% higher in brand favorability than those who didn’t use the app.

Success in marketing takes many forms. As brands compete for consumers’ attention, work on creating a deeper, more interactive experience by using the second screen. It must be seamless and shareable, and it has to provide something extra. Identify your goals and create a plan of action, then track the metrics that correspond to those goals to see whether your second-screen experience measures up.

David Saef is the executive vice president of MarketWorks and strategy at GES.

Where Should You Focus Your Mobile Budget—On An App or Your Website?

Extending Your Event With Mobile and Social

Closing the Gap Between Traditional and Data-Driven Marketing