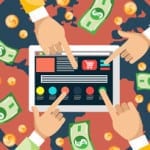 Programmatic has become a large and growing percentage of all U.S. digital advertising spend. In 2015 programmatic spending was estimated to be almost $15 billion—approximately 55% of all display advertising. While the majority of that spending is still focused on direct response, an increasing number of smart advertisers are looking at programmatic for branding and brand awareness efforts.

As the scale and reach of programmatic continues to grow, marketers are looking at ways to leverage this technology in a new light for two main reasons, targeting and creative units. Programmatic is so suited for brand awareness efforts because it is able to reach the exact right target audience, with exactly the right message, at exactly the right time. And excitingly, new creative options are being introduced to help brand’s messages appear significantly more compelling than they ever have before. .

Take as one example Oreo’s rapid response to the blackout during Super Bowl XLVII. That type of quick thinking, delivered to the right audience at exactly the right time, simply isn’t possible in the world of traditional media. It’s also difficult to imagine a large, insertion-ordered-based, banner-based campaign that could be spun up so quickly.

Many will argue that without the right KPI-tracking and metrics, this technology shouldn’t be used for branding. Even though we can’t necessarily measure the impact of a programmatic brand ad in the same way we track clickthrough rates and conversions, the targeting technology helps use dramatically reduce waste so we can be confident we are reaching a large and receptive audience effectively. Programmatic for brand awareness won’t work equally well in every environment, however, and it’s important to consider which platforms are best suited to this approach and why.

First, platforms like Facebook that are inherently engaging make sense. The recent introduction of Canvas is proof of the potential for brand advertising. It’s shaping up to be one of the most expressive ad units to date, particularly on mobile. It gives brands the ability to deliver a rich and immersive experience to highly targeted audiences.

Snapchat, too, is demonstrating how advertisers can reach targeted audiences with experiences that serve no goal other than to strengthen the bond between the consumer and a brand. Snapchat goes a step further than Facebook, in some ways, by enlisting the consumer in the equation by having them share the branded content with their friends.

Regardless of the platform though, there are some things advertisers need to consider when thinking about using programmatic for brand campaigns:

Evolving KPIs: Marketers need to change the conversations they’re having around KPIs. Brands need to become comfortable with the fact that immature but cutting edge platforms such as Snapchat may not have sophisticated analytics. Snapchat has access to huge under-saturated markets but may not have access to analytics. These platforms should be considered a savvy way to raise a brand’s profile among new and important audiences.

New Creative – Programmatic advertising is fast and furious, and because of that, agencies need to become more nimble about changing up creative and creating numerous iterations around one creative concept. Gone are the days of one creative concept lasting for two years on TV. The programmatic medium demands it. At AdExchanger’s Programmatic I/O conference last year, Adam Berger of Facebook described creating a thousand films for a campaign for Lexus. The campaign relied on Facebook’s rich audience data to deliver ads that reflected the specific interests of target audience members. While this might be an extreme example, it speaks to the importance of creative flexibility for programmatic storytelling.

The Programmatic Layer: Because brand awareness advertising doesn’t have the same types of quantifiable performance metrics as direct marketing, it’s important to frame and consider it differently. This approach is best thought of as a complement and extension of traditional advertising campaigns. By giving marketers the ability to focus their efforts, programmatic allows storylines from different channels to be presented to targeted audiences in a cost-effective way.

The rise of programmatic has forever changed the face of digital advertising. Now that its potential and effectiveness are understood, marketers are expanding its use beyond performance. This is an important development and one advertisers should embrace wholeheartedly.