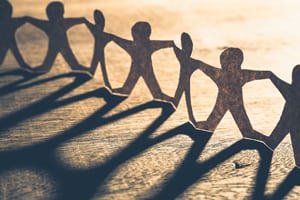 B2B sales and marketing teams need to focus on building —and measuring— the strength of their relationships in target accounts, according to a new report.

In the survey of 256 sales and marketing professionals—conducted by Sigstr and Heinz Marketing in June—83 percent of respondents said it was very important to develop authentic relationships within target accounts. But only 30 percent said they believed they can truly develop relationships that will impact their bottom line.

For many organizations, the quality of information they have about target accounts is an issue: less than 15 percent of respondents in general said they felt confident on their data, compared to a quarter of those with an ABM program. This could be because B2B data can change so quickly. “CRM data ages like fish, not wine,” quipped Justin Keller, vice president of marketing at Sigstr.

Fifty-seven percent of respondents had a structured ABM program in place, and 58 percent of those said ABM was very important to their organization’s success. But, only 30 percent said their ABM programs were very effective.

Metrics are an issue for many: 56 percent of respondents reported having a tool to measure customer relationships within target accounts, but only a third said their tools could measure strength of relationships. For those not using tools, only nine percent are confident in their manual measurement of relationships.

For those manually measuring relationship strength, a number of metrics are used, including past experience, conversations and meetings; frequency or recency of communications; social sharing and engagement; and number of mutual connections.

An overwhelming number of all sales and marketing pros surveyed—96 percent— agreed that a strong relationship with key stakeholders plays a major role in the outcome of a sale, but only 36 percent report being very reliant on these champions to move deals forward.

Many marketers aren’t taking advantage of a major resource—the relationships their colleagues have with prospects, says Keller. Forty-six percent of respondents said they knew “warm introductions” from colleagues are more effective in generating business, but less than 16 percent of respondents always make that move. Eighty-four percent said they only sometimes or never make introductions on behalf of colleagues.

“Your networks are a lot bigger than you think,” says Keller, who presented at #FlipMyFunnel in Boston last week. “Start with who you DO know, not who you want to know.”

Before engaging a prospect, Keller recommends checking out their network of relationships to see where mutual connections or interests might be present. Only 34 percent of respondents said they always do this before reaching out. But be careful as you do this, he added. “Do your homework, but don’t be creepy.”

When creating relationships, there’s nothing wrong with starting small, he added. “Don’t be afraid to begin by targeting one account and making relationships within that account matter.”