“You spend a ton of money on advertising and optimizing your site for organic search, only to have visitors look at a page or two and then go off into the ether, never to be seen again,” Eric Shanfelt, founder of eMedia Strategist told attendees during a session at Content Marketing World. 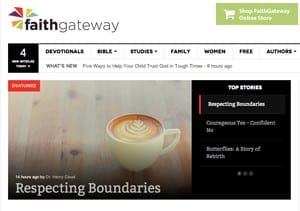 Getting those visitors to opt-in for your email list allows you to keep the conversation going, and build a relationship, which will ultimately build revenue.

Shanfelt is the former senior vice president of digital publishing at Harper Collins, where he helped launch FaithGateway, a content marketing platform for the company’s Christian publishing division.

The content promise of the community was to help users grow and share their faith. The business objectives were to drive ecommerce sales, retail channel sales and create benefits for authors so they would be more likely to stay with Harper Collins, and not drift to competing publishers..

“We needed to find the balance between what we sell and what customers need,” he said.

Eighteen months after launch, FaithGateway had over two million email subscribers and had generated over $2 million in ecommerce sales. Sales were up five to 10 times in retail channels and it became a key asset for author acquisition and retention, generating the equivalent advertising value of nearly $750,000 per month.

Shanfelt outlined three conversion strategies that worked for FaithGateway. In one, a free ebook was promoted. Once prospects opted-in via a dedicated landing page, they received upsell offers on a thank you page. An email drip campaign began with a confirmation, followed by the ebook delivery, and related product upsells. Opt-ins were also added to the Devotioinals Daily email newsletter list, which averages a 40% open rate.

This effort resulted in over 200,000 email opt-ins, as well as strong ecommerce sales for related products such as a video curriculum.

Partnerships have also worked well. Harper Collins licensed a translation of one book to YouVersion, which offers a free Bible app currently on about 200 million devices. Users who wanted to download the content to read offline had to give their email address, and were then put into the welcome drip sequence. An aggressive email purge program was put into place: If someone didn’t engage with the site for six months, they were dropped from the list.