Our monthly analysis of the world’s top brands and the marketing moves that are setting them apart.

Cisco was hardly the only organization that had to transform an in-person conference to a virtual gathering in the past year. But it was perhaps the only one that decided the night before its virtual event to postpone the conference for two weeks in support of Black Lives Matter.

Nonetheless, the tech company considers its Cisco Live 2020 educational and networking event to have been an unqualified success. More than 124,000 people from around the world logged on during the first day alone; by comparison, roughly 28,000 people had attended Cisco Live 2019 in San Diego. What’s more, 53 percent of the 2020 attendees were first-timers, and 84 percent of attendees said they “liked” or “loved” the conference, which won Best Virtual Event in Event Marketer’s 2020 Experience Design & Technology Awards.

Cisco announced on March 16 that it would take Cisco Live 2020, scheduled for May 31-June 4 in Las Vegas, virtual. As a tech company with a dedicated Technology Experiences Team of engineers and product managers who could help optimize its gamut of tech and apps, Cisco had an edge over many other organizations that were also grappling with making the switch from face-to-face to virtual events. And Cisco had introduced some digital elements—broadcasting keynotes on Facebook Live, using its Spark messaging platform to facilitate conversations among speakers and attendees—into Cisco Live during the previous years.

Even so, the company had less than 11 weeks to convert the five-day, 1,000-session in-person gathering into a virtual conference. Complicating matters: Its staff was working from their homes.

One of Cisco’s first decisions was to compress the event into just two days with 60 live and prerecorded sessions. This rightsizing was designed to help attendees maintain focus and engagement even as they continued to work (most likely from home) and deal with the myriad distractions resulting from life during a pandemic. “We had to prioritize,” Kathy Doyle, Director of global Cisco Live conferences, told Event Marketer. “We had to make everything much shorter and make it something that was easy to consume. The strategy that we took was we’re going to make it two days, focus on content, and then extend that reach after the event.” The post-event reach included loading recordings of the sessions from those two days onto the Cisco Live On-Demand Library as well as adding recordings throughout the summer of another 700 or so of the originally slated sessions.

For the virtual event, Cisco created four content tracks: the IT Leadership Channel, which looked at tech through a business lens; the IT Heroes Channel, with highly technical content including demos; the Innovation Channel, which focused on strategies for applying tech to solve business issues; and the Possibilities Channel, where in addition to sessions with thought leaders, attendees could watch musical performances by the likes of Fall Out Boy and the Chainsmokers. Live hosts on each channel gave the event an immediacy and spontaneity reminiscent of an in-person event.

Concerts were just one element designed to encourage engagement beyond listening to presentations. Others elements included virtual Zumba and yoga classes, trivia games, a TikTok dance contest, live Q&A sessions and the Meet the Engineer program, which enabled attendees to have one-on-one video conferences with Cisco pros via Cisco Webex Teams. In lieu of in-person networking and socializing, the company set up the #CiscoLive Social Lounge where attendees could connect via Instagram and Twitter. To encourage participation as well as social media sharing, Cisco gave away prizes ranging from bobblehead dolls to Apple TVs.

“There was a lot taking place on social media, and it was just buzzing the whole time,” Doyle said. “We created contests and real-time social engagement activities, which made it feel like an interactive in-person event.” 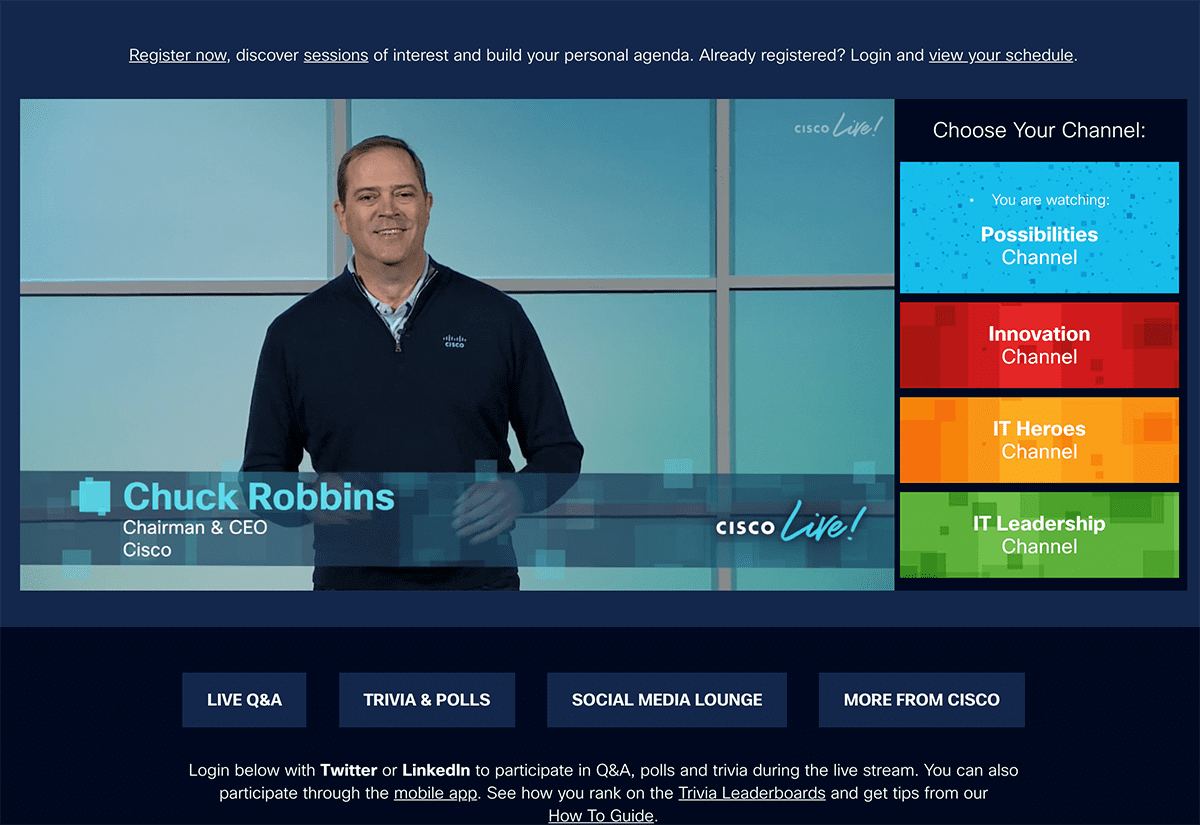 The new, virtual Cisco Live 2020 was scheduled for June 2 and 3. In the days prior, the protests against the of Brionna Taylor, George Floyd and other Black Americans had reached a fever pitch. Groups such as Black Lives Matter had organized Blackout Tuesday, a day of social media silence during which Black people were asked not to buy, sell or otherwise partake in business, to take place June 2.

Late in the day on June 1, Cisco decided to postpone Cisco Live for several weeks. “We had a couple of hours to shut everything down,” Doyle said. “We sent out communications to all of our customers and our partners, our analysts, all the internal teams across Cisco. We changed the website, we activated all the social channels, and it just all happened at one time.”

As Cisco chairman/CEO Chuck Robbins said in a video released that evening, “… in light of recent events, the turmoil happening across the United States, and with your feedback, we feel that this is the right thing to do. And that is something we always strive for at Cisco.” The company also announced it would donate $5 million to nonprofit organizations fighting discrimination.

The re-rescheduled Cisco Live was held June 16 and 17. Not only did attendance increase more than fourfold from the previous year, but the conference generated three million session views during the two days and 2.1 million social views; it was even a national trending topic on Twitter. Easily as important, attendees gave the content an average score of 4.5 points out of 5, exceeding expectations.

Scheduled for March 30 and 31, Cisco Live 2021 is another all-virtual conference. The company is of course implementing learnings from last year to bolster this year’s event. Among the takeaways you can use when creating your own virtual events:

* Don’t underestimate how long it can take to produce pre-recorded content. Producing a half-hour pre-recorded session will take longer than the half-hour of the actual taping. You need to factor in time for sound and lighting checks, editing, uploading and the like.

* Test any and all technology well in advance. And be sure to have solid contingency plans.

* Lean toward shorter sessions. A 45- or 60-minute session might command attendees’ attention when they’re in an off-site venue, but when they’re in their office or home they might find it difficult to block out distractions for that length of time. Some of the Cisco Live 2021 sessions are as short as 10 minutes.

* Mix pleasure with business. Pentatonix, Bebe Rexha, Keith Urban and the Killers are among the music acts scheduled to perform exclusively for Cisco Live 2021 attendees. And Serena Williams, Billie Jean King and James Cameron are among the non-tech celebrities speaking at sessions. Such star power amps up an entire conference, and many celebrities are more likely to participate in a virtual event than in one they’d have to travel to.

* Incentivize social sharing. Once again Cisco will have the #CiscoLive social media hub, complete with media leaderboards spotlighting attendees who’ve garnered the most social engagements. Cisco and some sponsors are also awarding prizes to attendees who post fun photos (say, of their dog watching a session on the computer), notable quotes and more.

* Keep the momentum going beyond the event. This year’s Cisco Showcase will offer more than 90 live and on-demand product demonstrations as well as Cisco experts available for live chat. Those demos will be available for viewing for a full month after the conference ends.