At the Cannes Lions International Festival of Creativity last month, Unilever CMO Keith Weed made waves by proclaiming his CPG giant would no longer work with social influencers who inflate the cost of their partnerships by purchasing fake followers. Marketers are beyond tired of wasting budget on bots with cold, personless profiles when they could be using those dollars to engage warm bodies with credit cards.

Exactly how big of a problem are fake followers? Points North Group, an influencer marketing analytics specialist, recently released second-quarter statistics that offer answers for Instagram after examining the platform’s sponsored posts by influencers with at least 10,000 followers. The New York-based company found brands spent $150 million in the U.S. and Canada in Q2 on Instagram influencers, and 7.3 percent—or $11 million—was lost to bots.

Some brands suffered much more than others. Raw Sugar Living evidently got ripped off the worst, as the skincare startup was number one on Points North Group’s Q2 chart for the most fooled brands. Forty-six percent of the followers Raw Sugar paid to interact with entailed fake accounts. Beauty marketer Clarins (43 percent), shoes seller Zappos (38 percent), ecommerce giant eBay (35 percent) and haircare notable Clairol (33 percent) round out the first half of the top 10 most fooled. Each brand declined comment for this story. 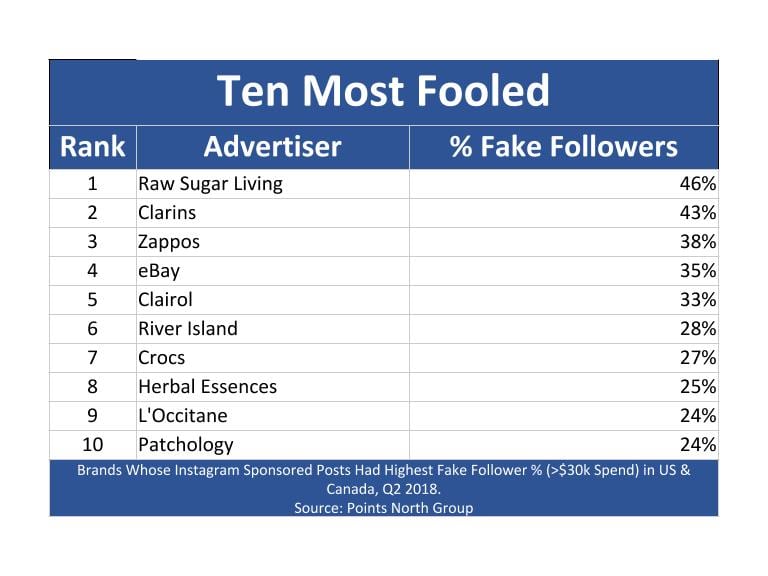 “The 10 most fooled brands’ sponsored posts on Instagram went to audiences that on average were 32 percent fake—meaning one-third of their money was wasted,” says Peter Storck, co-founder of Points North Group Group. “Nearly all brands that did big influencer campaigns in Q2 fell victim to the fake-follower problem.”

The report showed those victims would include some of the following names: 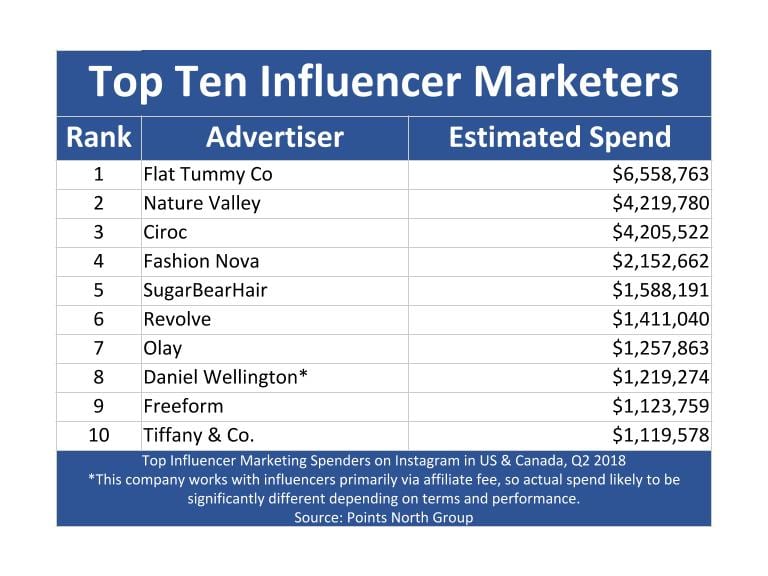 It’s inherently problematic for social media influencers to buy followers if they want to be on the level with brand partners. When followers are purchased for platforms like Instagram rather than accrued through hard-earned, post-by-post engagement, they are prone to be either non-human bots or inactive accounts that were opened by real users only to become abandoned avatars. Bought followers can also entail random people who still use their accounts but, in all likelihood, are not going to find the purchasing brand to be relevant to their interests.

Storck, who privately works with various clients on influencer data, adds, “We analyzed a campaign for a top U.S. retailer and found that its influencer marketing partner delivered just 10 percent of the impressions it claimed.”

But how do fake followers compare to digital ad fraud as a whole? For the first time, Points North Group in Q2 estimated influencer marketing budgets across all social platforms in the U.S. and Canada, and it concluded $211 million was spent. If like with Instagram, 7.3 percent of that $211 million was wasted on fake followers, then roughly $15 million went into the bot void in Q2. Assuming those numbers remain consistent across four quarters, the 2018 total would end up around $60 million. To compare, digital ad fraud in the U.S. was expected to reach $6.5 billion.

Thus, social influencer thieves are relatively small potatoes. For a marketer like Unilever’s Weed who is trying to maximize ROI, though, they’re worth chewing on.

“It’s important to contain the fake-follower problem before it mushrooms into a bigger one,” said marketing consultant David Deal. “Unilever is protecting the integrity of influencer marketing by casting a spotlight on fake followers.”

With that in mind, today, it is also releasing a top 10 list for brands that got the best cost-per-thousand (CPM) rates last quarter. Major winners include Uniqlo, The Body Shop and Revlon. Check out the full chart that entails each company’s average CPM rate for the quarter. 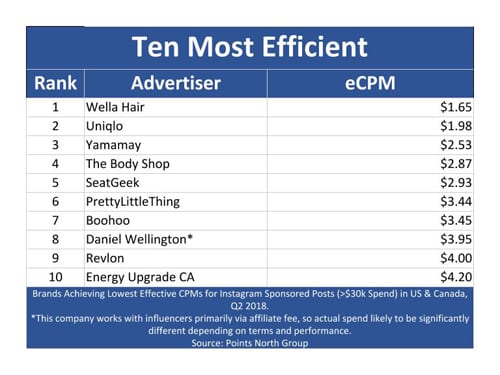