Social media influencer Casey Neistat’s “feud” last week with Burger King is an example of a battle where everybody wins.

Neistat was intrigued when he noticed that BK had suddenly liked several of his tweets from 10 years ago, and wondered what was up in a tweet on Jan. 23 that got 14,000+ likes. He then found out this happened to several other popular influencers, and that it was all part of a campaign to reintroduce Funnel Cake Fries.

He posted a seven-minute video on YouTube, lamenting how Burger King had “manipulated” him in to hawking their “sugar coated French fries.” The thing that upset him the most? “How genius it was! We were like the little mice—we went for the cheese in the trap and it snapped on us! You win, Burger King!”

Whoever came up with the campaign should get a raise, he said, pointing out that the company got a lot of mileage out of the targeted social influencers without their consent.

“So, I want a little something in return,” Neistat said in the video. “I gave you value and I should be given something in exchange for that, to level out the balance in the social media universe.” 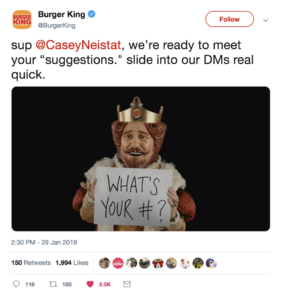 He wasn’t looking to become a paid burger spokesman. Rather, he called them out, suggesting that they make a donation to two charities he supports.

To his surprise, Burger King quickly followed him on Twitter, and tweeted to him that they wanted to get in touch and make things right.

In a follow-up over the weekend, he revealed that the global CMO of Burger King reached out to him directly and the company wanted to donate $25,000 each to the Boys and Girls Clubs of America and Make-A-Wish. Neistat asked if they could do something for his loyal fans, and BK offered up 5,000 free meals, which went quickly to the first fans quick enough to claim them.

“I don’t know much about Burger King. I definitely didn’t know anything about them before making that joke video two days ago. In getting to know them, I appreciate their openmindedness and candor on this. I appreciate that they got the joke.”

Was the effort successful? I’d say yes. Burger King and Neistat both got some press, two worthwhile charities got some cash, 5,000 fans got lunch and my teenage son (who tipped me off to this story) and I are now craving funnel fries. Mission accomplished.