Mars knows pet lovers and understands that they treat their pets like a member of the family. However, research showed that Walmart customers didn’t associate the store with pet care and felt that the store’s pet care selection was limited and often out of stock. Of the 90 million pet owners shopping at Walmart each week, less than 60% buy pet food at Walmart and less than 40% buy supplies, so there was a significant opportunity to capture market share. 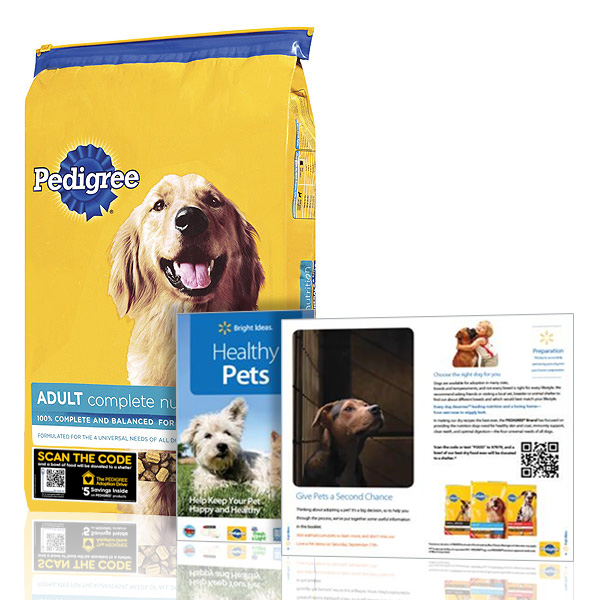 Mars wanted to help improve that perception and in return improve its own brand’s sales at the retail chain. Catapult developed “Pets Love Walmart,” a fully integrated shopper marketing program, grounded in the emotional appeal of raising money for local pet shelters.

First, Walmart hosted weekly in-store “edutainment” events to educate shoppers about proper health care of a pet. Second, all packages of Pedigree included a QR code that, when scanned, directly donated “a bowl of food” to a shelter. The code also directed shoppers to a mobile site with additional ways to donate food. Local shelters were invited to host pet adoption events at neighborhood Walmart store locations, leveraging PR and helping promote the QR code initiative to donate food and raise money at the local level.

Banner ads were placed on Walmart.com, while an article was published in Walmart World magazine. The Walmart circular included a Pedigree special section with a QR code and a Cesar area dedicated to smaller dogs. The "Pets Love Walmart" graphic was displayed throughout the path to purchase. 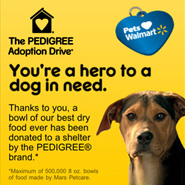 In-store demos included literature and product samples. Multi-item end caps (a first for the category) and pallets of Whiskas and Cesar were also featured. Shoppers were urged to take action in the aisles by scanning the QR code on the packaging/displays, which triggered the donation and sent shoppers to a dedicated Pets Love Walmart mobile site for more information. The promotion was featured on both the Pedigree Foundation and Walmart Facebook pages.

For Mars, the "Pets Love Walmart" promotion jumpstarted participating brand sales by 25% and drove incremental display across all Walmart stores. Overall sales in the pet category grew by double digits at Walmart. One survey revealed a 15-point jump in the answer to the question “Walmart is the first place I think of for pet supplies.” Walmart felt the program was so successful that two similar events have been schedule for 2012.