MilkPEP, the Milk Processor Education Program, wanted to turn around declining milk sales. They set a goal of increasing milk sales during the promotion period of .7%, a significant increase in an $11.2 billion industry.

With consumers making coffee at home to spend less money, and also increasingly looking for health benefits in their diet, MilkPEP and marketing agency Draftfcb saw an opportunity to educate consumers on the nine essential nutrients a small amount of milk – the amount someone puts in their coffee – provides. 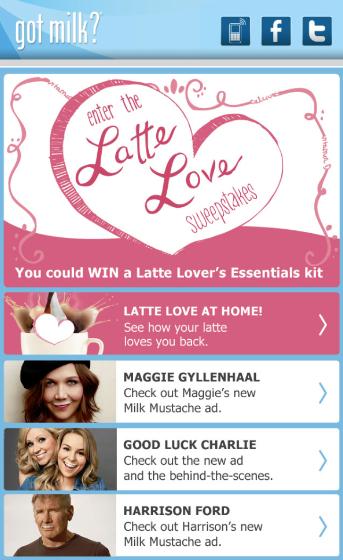 They came up with the “Rethink Your Latte” promotion to learn how “the lattes you love actually love you back.” Key influencer bloggers were engaged to seed the message via their blogs, Facebook and Twitter to spread ‘latte love’ and build advocates.

Celebrity Maggie Gyllenhaal, a down-to-earth busy mom, actress and latte drinker, endorsed the message and spread the word via print media, digital content (including mobile, right) and a launch event.

The promotion drove consumer to MilkPEP’s social media where they could win a Latte Lovers Essentials Kit every hour for 30 days, to make lattes at home. The kits included Bodum milk frother, Torani vanilla syrup, Starbucks Coffee, a free milk coupon, a Latte Love mug and a vanilla latte recipe. Consumers entered the content by answering a short, fun, educational quiz on Facebook. There was also a text-to-win option at retail. 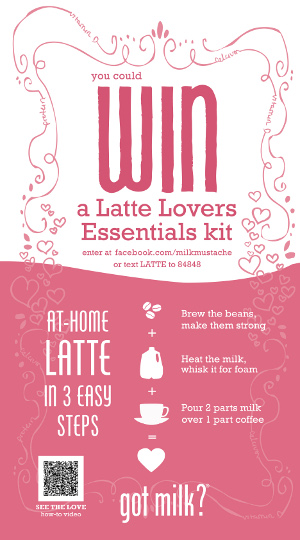 Retail signage communicated the nutritional message and latte promotion in both milk and coffee aisles. A QR code launched a whimsical ‘how-to’ video that showed how easy it is to make lattes at home. The video was also promoted on Facebook and YouTube, while targeted ads on Facebook enabled consumers to like or visit the milk page and share the experience.