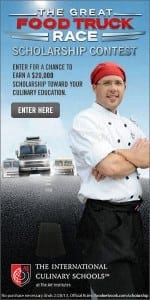 It makes sense that potential culinary students would be fans of The Food Network. So when the Art Institutes, a system of more than 50 schools across North America, wanted to increase brand awareness of its International Culinary Schools, it called on agency Match Drive to create a partnership with The Food Network and its series The Great Food Truck Race.

Not only is The Great Food Truck Race the network’s top-rated program, but it also skews the youngest, perfect for the Art Institutes’ target audience of recent and future high school graduates. As part of the sponsorship, eight Art Institutes’ students competed on the show, in which teams travel across the country, dishing up food and participating in challenges as they vie to win their own foodtruck business. In addition, FoodNetwork.com held a cobranded contest for a scholarship to the International Culinary Schools, which was promoted via TV commercials featuring the students who were competing on the series, digital ads, and social media.

And the Art Institutes tied it all together with its own branded food truck. During a month-long tour across the country, the truck held cooking competitions with local food trucks and hosted appearances by previous winners of The Great Food Truck Race, with posts on Facebook and Twitter inviting followers who couldn’t stop by in person along for the ride.

The tour alone generated nearly 4,000 “likes” for the Art Institutes’ Facebook page and 4.3 million social media impressions. By the time the four-month campaign ended in December 2012, nearly 7,500 potential students had participated in the scholarship contest, and more than half had opted in to be contacted by the International Culinary Schools admissions department. And the Art Institutes’ aided brand awareness rose to 88%, up 4% from the previous year, while brand favorability increased to 56%, up 3% from a year earlier—food for thought for other brands considering sponsorships.