AT&T was coming out with the LG Thrill 4G – a glasses-free 3D smartphone. 3D, however, was considered a gimmick in the marketplace, and AT&T needed to overcome the perception to effectively get through to its target consumer. 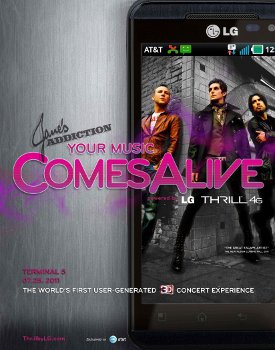 Adding to the challenge was the fact that LG wasn’t first to market. HTC had released its glasses-free 3D phone a month earlier. Without a big budget, AT&T needed to launch the LG Thrill nationally and convert skeptics with just one promotion.

In less than two months, AT&T built buzz by giving key influencers the chance to test drive the phone. Each year millions of people record concert footage using their smartphones, so Momentum decided to throw a concert and invite key tech influencers to shoot the entire show using the LG Thrill.

"Jane’s Addiction Comes Alive" was the world’s first user-generated 3D concert film shot entirely with 3D smartphones by consumers. It was a crowd-sourcing entertainment experiment where tastemakers, influencers and connectors were invited to “see, shoot and share” the brand story via YouTube, Twitter and Facebook.

AT&T partnered with Google/YouTube and their new 3D platform to host the concert promotion and spread the word. The agency leveraged Twitter, Facebook, Klout and key blogs to bring high-level influential people to the party and for ticket giveaways. The band also received a phone to shoot three teaser videos for their fans. Meanwhile, a Facebook contest built buzz by offering a VIP trip to meet the band at the show.

The telecom provider took over Terminal 5 in Hell’s Kitchen and edited 1,000 minutes of 3D content taken by 100 people into a 60-minute branded film that premiered on YouTube 3D, where consumers could watch the entire concert in a variety of 3D formats, including HTML5 stereo view, interleaved, side by side, and even red/cyan for a retro feel. The show was also live streamed in 2D for consumers to watch at home and compare the quality with UG3D.

Goals were not only met but exceeded. More than 100 people took the challenge to see, shoot and share the event. More than 5,000 shares were recorded on Facebook and 1,000 tweets were sent, resulting in reaching 725,000 friends and followers.

The promotion generated nearly 174 million media impressions, including key mentions in The New York Times, on CNN and in major tech and industry blogs, and 2 million YouTube views.